The 32nd Ecomist Blue Lake Festival was a huge success over the Auckland anniversary weekend.
Over 400 participants enjoyed the superb weather and pushed their limits with the swim, cycle and run categories. Registration for the kid’s triathlon sold out in advance and plans to increase the number next year are in the works.

Rotorua of Triathlon and Multisport (RATS) Event Director Marie says, “The Ecomist Blue Lake Festival is an event that is accessible to anyone who can run, swim or cycle, it is not just for elites, but an affordable fun weekend for the whole family. It has been a wonderful weekend.” All participants received a can of Ecomist tropical strength personal bug repellent and an SFP20 Ecomist lip balms plus, other great sponsored giveaways.

WORLD CHAMPION SWIMMER
World’s Top Swim Chap Javier Gomez Noya was there to support his Tauranga born partner and also participate in the 2K swim, in which he placed 1st. Javier says, “I love it here, I have been training in NZ for a couple of months. NZ traditionally has great triathletes and medalists, I have been racing with New Zealanders for a long time.”
Javier says he loved training and racing as a child and is now a 5 time Triathlon world champion, 4 time European Champion, Olympic Silver Medalist London 2012, IM70.3 world champion, X-TERRA World Champion, an impressive record.
Javier says NZ has great training facilities and he plans to stay in NZ to continue his training over the next couple of months. 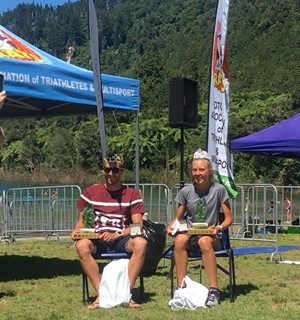 Marie has enjoyed the excitement around the event and seeing people of all ages and abilities competing. “There’s no reason to not get involved, as it caters to everyone, we look forward to holding the event next year and will discuss increasing the cap on the kids triathlon as this has proved very popular this year.”
For more information about the winners, time and other events visit RATS  and follow RATS Facebook

Are you sure you want to logout?